Did you know that you can experience the calming peace of nature right in the centre of Hamina? The 4,5-kilometre Fortress Trail meanders in the fortress ramparts in Hamina. You can walk an almost complete circle along the ramparts surrounding the Hamina centre.

You get to traverse over exciting vaulted corridors, beside built bulwarks and past the renovated Hamina Bastion with its casemate vaults. The trail also offers views of the magnificent old buildings of Hamina. If you do not want to walk the entire trail, you can pick just part of it.

Along the nature trail, you can jog your memory about the things you learned in biology class! There are rare species that only grow here, so please do not tread on the vegetation beside the trail. Along the route, edible natural herbs can also be found.

You can upload the Trail-map from here. 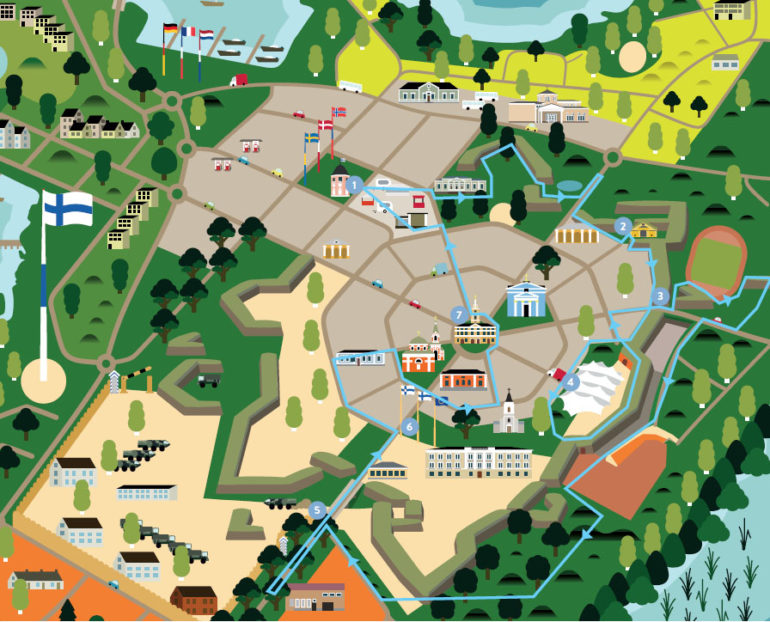 Meet the history of the fortress bulwarks

The round Flag Tower at what used to be the tip of Bastion Helsinki was originally built for the commander of the fortress. The bastion and the surrounding embankments were dismantled in 1889 during the town’s expansion.

The former gunpowder magazine in the Bastion Hämeenlinna has also been used as a communications center during the war. Now it serves as an art gallery and meeting facility. A Japanese-style cherry tree park adorns the yard of the magazine. Farther back is the Hamina Summer theater arena.

Wildlife within the embankments

The Rauhankatu Street will lead you to the Kirkkojärvi nature trail,which traverses along a valuable bird protection area. Enjoy nature right along the fortress trail and climb the bird watching tower for an opportunity to see a diverse nesting area of up to 60 species of birds.

The magnificent vaults of the Hamina Bastion

A bastion is part of a fortress structure built in an angular shape and positioned at the six protruding corners of the fort. A bastion was built as a fortification to offer protection, and typically provided cannon defense. The Central Bastion, however, was originally designed as explosion-proof storage facilities. The brick vaults house 58 casemates then used for munitions.

Various parts of the Central Bastion structures were repaired in the 1970s. For the casemate repairs, 600 000 bricks were used. The repairs were carried out by prisoners.

Access to the fortified Hamina was possible through three gates equipped with booms and drawbridges. There was a guardhouse at each gate. The Medieval highway between Turku and Vyborg, also known as the King’s Road, passed through the center of Hamina via what are now known as the Kadettikoulunkatu and Mannerheiminkatu streets. The buildings are currently privately owned or used by the Reserve Officer School.

Impressive meetings in the streets and alleyways

The Reserve Officer School Park houses a small brick building, which is a well from the 1860s. The park also exhibits the Path of the Flag of Finland, included in the Flag World of Hamina. There is also a monument to fallen officers, with the names of more that 4000 Finnish officers who died between 1939-1944. A memorial of the Orthdox chapel was built in 1837 to commemorate the Church of St Peter and St Paul, which used to be located in the field of the Reserve Officer School.

Become enchanted with the atmosphere of the Town Hall Square

The historic Hamina Town Hall Square is located in the center of town. Along the circular streets, Isoympyräkatu and Pikkuympyräkatu, you can walk among enchanting old wooden buildings, historical sights and buildings and churches which tell the story of Hamina.

The center of the Town Hall Square is Renaissance-style Town Hall built in 1798. Situated in the immediate vicinity of the Town Hall are three beautiful churches which represent different styles of architecture – those of St. Mary’s, St. John’s and the Orthodox church of St. Peter and St. Paul. It is also worth stopping by the Shopkeeper’s Museum on Kasarminkatu street -its old store, courtyard residences and outbuildings presents Finnish-Russian merchant traditions of the early 1900s.